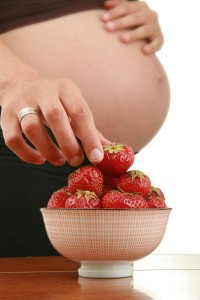 As some of you may know, I am pregnant!  I'm about 6 months along and feeling great.  Being pregnant has certainly been interesting, and even more interesting to experience as an intuitive eater.

At first, I wasn't sure if this philosophy, which has brought so much peace and well-being to my life, was fully compatible with the process of growing a human.  Friends, family members, doctors, websites, and books are constantly telling you what not to eat when you're pregnant, which feels a lot like a diet.  Intuitive eaters like myself are decidedly anti-diet, so the suggestion that certain foods are suddenly off-limits definitely didn't sit well with me.  Of course I care about the well-being of my growing child, and don't want to do anything that would harm the little one, but I also don't want to sabotage all the work I've done to get where I am right now as an intuitive eater.  I struggled with this at first, but in the end I've realized that my intuitive eating thinking is probably the healthiest way to approach eating while pregnant.  Let me explain a couple reasons why.

It started during my first trimester, when I found myself dealing with morning sickness.  I've certainly known people who have suffered on a way more intense level than I did, so I thank my lucky stars that it wasn't too bad, but nevertheless, from weeks seven to about twelve or thirteen I pretty much felt nauseous all the time, and almost no food appealed to me (and as someone who truly enjoys and appreciates food, this was a pretty horrifying experience!).  I didn't want to eat anything, but if I failed to eat, the nausea would get considerably worse.  So I basically had to force myself to eat whatever didn't completely repulse me.  I remember telling my sister about it, declaring that I definitely wasn't eating intuitively (since I was eating when I really didn't want to).  She quickly corrected me, saying that in fact I was eating intuitively and listening to my body, since I was responding to the nausea by eating in order to avoid it getting any worse.  Certainly this isn't nearly as much fun as eating when you're hungry and really enjoying the eating experience, but she was right-- my internal body signals were driving my eating behaviors, and that's most certainly intuitive eating, just maybe the less glamorous part of it!

Another thing I've noticed about being an intuitive eater is that I haven't had too many weird cravings for or binges on any particular food.  This could be a coincidence, but I tend to think it has something to do with the "Make Peace with Food" part of being an intuitive eater, meaning that no food is ever considered "forbidden" to me.  A woman I work with told me she lived on Tommy's chili burgers and Haagen Dazs ice cream during her entire pregnancy.  Predictably, she gained a ton of weight, and has spent the last 20 years struggling to lose it.  While I certainly don't know her dieting history, or have any specific insight into her relationship with food, I would venture to guess that before becoming pregnant, she probably didn't allow herself to eat these types of foods on a regular basis.  Once she got pregnant, however, she likely did what most women do-- she took the pregnancy as license to eat whatever she wanted to, or, more specifically, all the foods she never allowed herself to eat before becoming pregnant.  I simply do not have this urge.  I already eat what I want, when I want it, so why would I need to go on a binge and eat all those rich foods now that I'm pregnant? 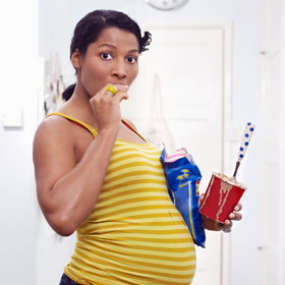 I'll be honest...there's part of me that was a little sad when I realized that I would never experience this I'm-pregnant-so-I-have-license-to-eat-everything-in-sight rite of passage.  It's part of the experience of being pregnant, right?!  But, in the end, I'm so thankful that I have this healthy attitude towards eating during this time in my life.  Besides helping me to maintain my sanity, the balanced, binge-free diet I'm eating as an intuitive eater means there's a good chance I won't have to struggle for years to lose unwanted "baby weight" after giving birth to my child, and that's not something a whole lot of women can say!  Do I still eat ice cream and burgers?  Yes!  But it's generally an occasional thing for when I really feel like having them, just like before I was pregnant.  I haven't, however, been gorging myself on these items because I've always had access to them, and always will, whether or not I'm pregnant.  Isn't that fantastic?!

So even though it has been difficult to reconcile intuitive eating with the part of pregnancy where you're told not to eat certain things, I feel that as a whole, this philosophy has been the healthiest possible way to approach this process.  Not only am I nourishing my baby with a well-balanced diet, but I'm also setting myself up for a healthier post-baby recovery, both physically and mentally.  Not to mention the fact that my healthy attitude towards food will be passed along to my child, so that she, too, can experience the freedom that comes with rejecting diets, respecting your body, and allowing your intuition to guide your eating.  Yet another reason to absolutely love intuitive eating!
Posted by Lisa at 4:08 PM