And the beet goes on

Just wanted to post a quick update on my veggie adventures.  Last week I received beets in my produce box, which was a little scary because I've only ever eaten them in a restaurant, but in a way I was kind of glad that I was forced to learn how to prepare them.  And it turns out they're not scary at all!  The other night I made a Tart with Beets, Figs, and Chevre (goat cheese), a recipe I found on gojee.com, a really fun site where you can search by what ingredients you have, as well as put in what you don't like (so I won't get any recipes that have mayonnaise or mustard in them...yuck!).  The tart turned out really good!  When I first saw the size of it, I was afraid it wouldn't be enough for two people, but because the crust turned out to be more like pie crust, the richness of it made it so that we only ate about two-thirds of it (because we were eating intuitively and stopped when we were satisfied).  Here's the full recipe, as well as some photos I took of my beautiful creation: 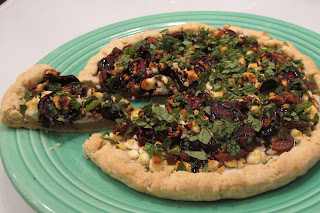 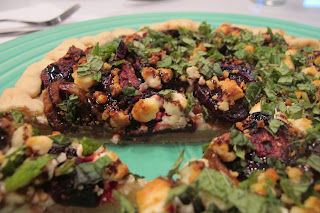 From the looks of it, this recipe seemed pretty involved, and I assumed it would take me a really long time to prepare it.  It turns out it was fairly easy (especially since my awesome new food processor did all the work in preparing the dough for the crust!), and the actual hands-on time was less than an hour. Not too bad for a gourmet-ish meal!

Sometimes, however, I can't afford to make something that requires an hour of hands-on time, so I like to have go-to meals that are quick and tasty. One standby dinner we've been making a lot lately are tostadas.  My husband grew up in Mexico, where these were a staple in his household, usually topped with things like beans, ham, cheese and avocado.  Tostadas look like hard taco shells flattened out, and can be topped with almost anything you want.  I believe they also sell a whole wheat version, but I have yet to find them in my grocery store.  When we make tostadas, we usually start with a base of refried beans, and then throw on some sliced avocado and panela cheese...two of those are usually enough for me as a meal.  Last week we mixed it up a little and used chopped up green leaf lettuce from our produce box, as well as some leftover crockpot chicken my husband had made (basically just chicken breasts, whatever salsa you like, throw it in a crockpot and cook on low overnight) to create a sort of taco salad tostada.  They were super quick, and really yummy!
I'm realizing that preparing a delicious, well-balanced, satisfying meal doesn't always have to be super involved and complicated.  However, sometimes it's fun to challenge myself to try to make something new that might take a little more effort. Either way, I'm happy to avoid having to order in or eat out as frequently, because as long as I'm eating at home, I'm not only saving money, but I can also have more control over what's in my food.
Posted by Lisa at 8:39 AM