Just read this short article called Getting Kids to Eat Their Veggies. According to the results of a study cited in the article, it's as simple as giving kids stickers as a reward for trying new foods. Who knew?!


I was a VERY picky eater as a kid. I would decide, without even trying something, that I didn't like it. It wasn't until adulthood that I started challenging some of my preferences, and trying the things I had previously turned my nose up at (although I still won't go near mayonaisse, mustard, or raw tomatoes...yuck!). 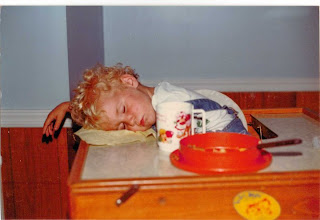 This is me as a kid, clearly not interested in eating whatever food item had been offered to me.


I am hoping to raise kids that aren't as picky as I was (or am), so maybe I'll try this sticker trick to get them to like all foods, especially veggies and other healthier options. If only it were that easy to get ME to like more veggies as an adult!
Posted by Lisa at 9:10 AM

Email ThisBlogThis!Share to TwitterShare to FacebookShare to Pinterest
Labels: Vegetables